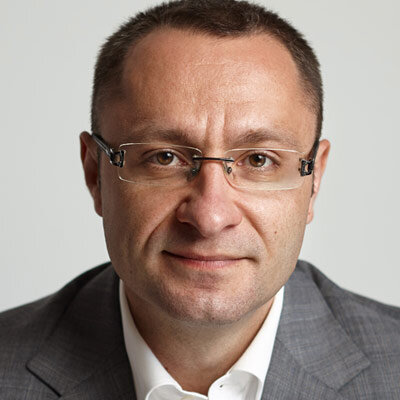 Ambassador of Ukraine to Australia,

Vasyl Myroshnychenko resumed the functions of the Ambassador of Ukraine to Australia on April 1, 2022.

On March 7th, 2022 Minister of Defence of Ukraine appointed him as his advisor.

In May of 2021, he was appointed as a member of the Supervisory Board of the Ukrainian Institute, a cultural diplomacy outfit of the Ministry of Foreign Affairs of Ukraine.

Prior to joining the Foreign Service, he was an active business and civil society leader in Ukraine.

From 2006 to 2022, he was a Partner at CFC Big Ideas, a Kyiv-based strategic communications company. He has 20 years of experience advising clients on corporate communications, public affairs and reputation management. Vasyl advised many multinational companies and domestic industry leaders across various sectors.

Vasyl is a co-founder of Ukraine Crisis Media Center, a media NGO set up in early March of 2014 aimed at amplifying Ukraine’s voice internationally. He was in charge of numerous projects and campaigns during 2014-2019.

In 2015-2016, he was a Head of Board of Professional Government Association, an NGO which has united Ukrainian alumni of the Western Universities with a goal of mobilizing talent for the economic, legal and judicial reforms in Ukraine.

He sat on the board of the Ukrainian-British City Club, a London-based organisation promoting UK-Ukraine trade and investment relations between 2007-2022.

In 2018, Vasyl was a Marshall Memorial Fellow, a prestigious leadership program of the German Marshall Fund of the United States.

In 2002-2004, Vasyl was a President of the European Youth Parliament-Ukraine, an international youth NGO.

He was a Chevening Scholar and earned MSc in Politics of the World Economy from the London School of Economics and Political Science (2006, UK). He also holds MA and BA degrees in international relations from Institute of International Relations, Kyiv National Shevchenko University (2002, 2003). Vasyl is a graduate of the Global Village for Future Leaders of Business and Industry program at Iacocca Institute, Lehigh University (2002, USA) and Swedish Institute Management Program (Sweden, 2009) and a two-week intensive course on public affairs and advocacy from the Center of Congressional and Presidential Studies at American University in Washington, DC (USA, 2014).